I  make paintings and installations that reference vernacular photography from the 1970s to the present day. In my paintings of oil on wood, canvas, Plexi-glass and mylar, I investigate snapshots found in discarded photo albums. Although the era of analog photo collecting in popular culture is mostly over,  I am interested in both the emotional connection and cultural impact of photo collecting.​ 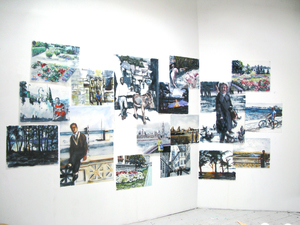 New Orleans World's Fair Installation
The New Orleans World's Fair Installation references snapshots I found in a Louisiana thrift store.  (23 panels of oil on Plexi glass on shelves). The plexi-glass panels include both reverse and direct painting in oil and acrylic.
My installation explores one individual's memory of a day at the fair; as well as a look back at the now obsolete cultural phenomenon of World Expositions.

Fan Album--paintings
I found in a NYC thrift store a fan album of more than 100 early snapshots of the band Menudo.  One young girl had lovingly collected all of the snapshots and painstakenly arranged them. I was intrigued by her devotion as well as the vibrant images of the young band members.
As a homage to both the young fan and the band, I completed an installation of oil and mylar paintings as well as more than a dozen paintings on canvas that refer to the found snapshots. By exploring one young fan's album of the band, the strong cultural impact of band in 80’s and 90’s is revealed.  2013-16

Fan Album --works on mylar
Fan snapshots of a 1980's Boy Band found in a thrift store album, are the focus of this painting series. Oil on mylar.  2012-13

Galactic 99 Installation
Galactic 99 is painting installation of 99 shaped panels of oil on wood and plexi. Both Galactic 99 installation and the Blue Screen series of paintings reference snapshots of  workers that I found taped to the wall of a pizzeria. In this series I investigate the role of the individual with in a group—studying how, in life, people come together randomly, interact and become close knit community.   2010-13

New York Story
New York Story This project's source is an album found in the Chelsea Flea Market containing snapshots of a group of 1970’s era friends at a party. 25 shaped paintings. 2005-2006